Kerry Indev is one of India’s Leading Integrated Logistics Service Provider. Established in 1984 and head quartered in Chennai, we offer multiple Logistics and Supply Chain services like International Freight Forwarding, Project Logistics, Customs Brokerage , Infrastructure (such as CFS, ICDs ), Air Freight Transhipment Centres, Free Trade Warehousing , Contract Logistics with Domestic Distribution and 4PL services. At Kerry Indev, we make the whole world of Logistics and Distribution at your fingertips. With infrastructure backed with technology and pan India presence with 24+ locations, we always work towards delivering quality services, Logistics that work for you.

Kerry Indev has more than 2500 employees with strong and stable financial background, rated A1 by CRSISL and 5A1 by Dun & Bradstreet – an indicator of the company’s financial strength. We are part of KLN Group (Kerry Logistics Network), Asia-based global 3PL with presence in 55+ countries

Indev is also partnered with PACC Line to handle the vessels across all Indian ports. Established in 1997, PACC Line is the specialist liner division of Pacific Carriers Limited (PCL), one of the largest shipping companies headquartered in Singapore. The strong fleet size of PACC enables Kerry Indev to design logistics solutions for more challenging projects 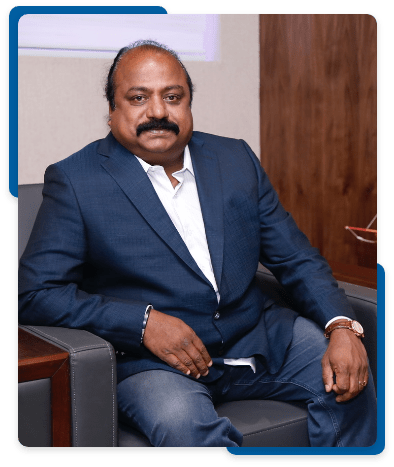 Dr. Xavier Britto started his career as a Professor in Loyola College, Chennai and later ventured into the field of Supply Chain. In 1984, he founded INDEV, an acronym for Indian Development. In 2016, Kerry Logistics Network further invested in Indev and Kerry Indev logistics Private Limited was formed.

With Mr.Britto’s strong belief that the key to success lies in customer satisfaction, Kerry Indev achieved exponential growth and expansion with the trust and patronage of its customers. He pioneered several concepts in the field of logistics and supply chain and outlined various initiatives that are currently underway. He has received, personally and professionally, various awards from multilateral levels including “World Customs Organization Certificate of Merit” from Govt. of India and several National and International Exim Awards. Along with these, he has also been recognized and honoured for his charitable activities.

In 2019, M/s Vels Institute of Science, Technology and Advanced Studies (VISTAS) conferred Mr. Britto with the Degree of Doctor of Literature (HonorisCausa) in recognition of his immense contribution to this field and his philanthropic work benefitting the society at large.

With a global presence across 59 countries and territories, KLN has established a solid foothold in half of the world’s emerging markets. KLN has diverse infrastructure, extensive coverage in international gateways and local expertise span across China, India, Southeast Asia, the CIS, Middle East, LATAM and other locations. The Group generated a revenue of over HK$53 billion in 2020 and is the largest international logistics company listed on the Hong Kong Stock Exchange (Stock Code 0636.HK) as well as a selected Member of the Hang Seng Corporate Sustainability Index Series 2020-2021.

We're not around right now. But you can send us an email and we'll get back to you, asap.